Impact of waves on a vertical wall

The objective of the project (MRIF, Québec-Kyoto cooperation) is to study the feasibility of electrical production by wave-powered devices enabling the alert or emergency services to be supplied, even in the event of an electrical failure following a marine submersion or a tsunami.

Firstly, The study of wave impact forces will be studied to estimate the natural resources available. The database obtained at INRS on a quasi-real scale will be re-analyzed.

On the other hand, an assessment of the required energies will be carried out for different crisis management solutions 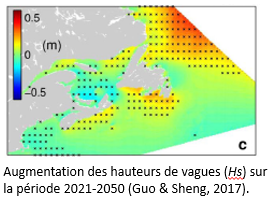 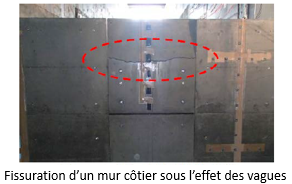 The main objective of the SINAPSE proposal ‘Digital simulations applied to sedimentary physics’ is to better understand the technical and scientific obstacles that prevent the emergence of operational tools for predicting sediment transport and morphodynamic changes. 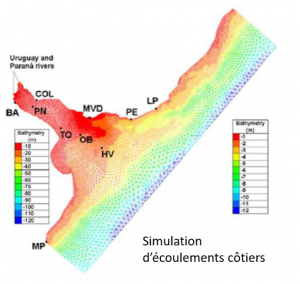 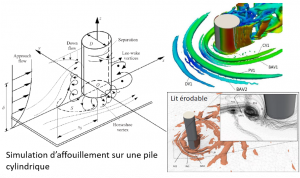 Part 1 : Sediment transport and biochemical quality of the environment. 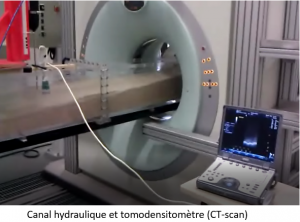 Part 2 : Role of porosity-saturation in the erosion of banks and beaches.

CIDCO has developed a Hydroball tool for measuring tides and waves. The smart buoy is 40cm diameter for 13kg. It communicates by a GNSS receiver and antenna.

In order to improve the quality of the measurements, test and extend the conditions of use of the new device, tests in large hydraulic channel were carried out.

The buoy was tested for different wave conditions. The measurement uncertainties were determined and reduced later. 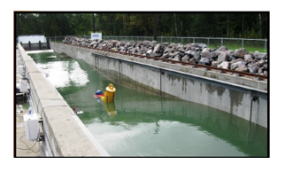 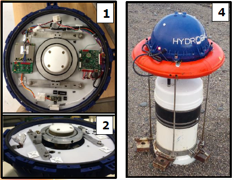 Many areas in Quebec are affected by coastal erosion. Although a natural phenomenon, erosion is currently on the rise because of climate change. The impacts of climate change include rising sea levels, shifting wave and ice patterns, and changes in the occurrence of extreme meteorological events. These impacts can cause considerable damage to roads and other coastal infrastructure. For example, waves can destabilize protective walls and cause partial or total collapse. .

Project objectives
The research project seeked a better understanding of the design of coastal protection structures and to ensure the sustainability of the walls protecting coastal roads in the context of climate change. More specifically, the objectives are to:

Project description
The project consisted of scientific studies and simulations using small-scale physical models to reproduce natural conditions. The Chair’s team used the wave flume and other tools to simulate the impacts of rising sea levels and increased wave height on vertical walls. This work allowed researchers to analyze different nearshore hydrodynamic conditions, which in turn will allow them to evaluate the forces applied to walls, the flows required for wave crossing, and the consequences of these phenomena on coastal infrastructure. The knowledge gained will help us adapt the design of protective walls for the new conditions created by climate change.

Wave flume modeling of a beach profile for beach nourishment

A lot of the infrastructure and buildings located along the St. Lawrence shorelines are affected by erosion and coastal flooding. Despite the shoreline protection measures in place, some structures are still affected when storm surges and large waves lead to very high water levels. For example, a wall built above a beach was affected by scouring during a recent storm, and beach nourishment was the solution selected to remediate the problem. This project will serve as a real-world case study for modeling experiments in the wave flume.

Project objectives
The objectives of this project were to:

Project description
Scientific studies and simulations using reduced-scale physical models were carried out in the wave flume to determine the changes in the slope of a beach composed of a mixture of sand and gravel when subjected to storm surges. The flume experiments were carried out long enough for researchers to estimate the time required for waves to sort the sediment and form a protective berm at the base of the retaining wall. Small scale modeling of a beach enableb coastal engineers to improve the beach replenishment methods used in Quebec and develop more sustainable protection measures for coastal communities.