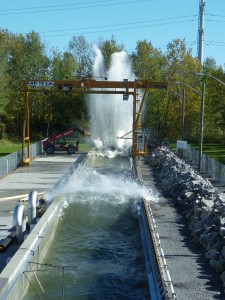 The Environmental Hydraulics Laboratory possesses a multifunctional large scale wave flume. Located in the Québec Metro High Tech Park, the flume is 120 m long and has a depth and a width of 5 m. It is the largest of its kind in North America.

The flume is designed for modeling the interactions of waves, tides, currents, and sediment transport. This equipment enables researchers to develop sustainable approaches to coastal management for controlling erosion caused by climate change. The flume has numerous other potential applications.

The wavemaker is a piston-type mechanism with a maximum stroke length of 4 m. The flume can be set up with a variety of initial conditions, including regular and irregular waves, and offers a host of user-defined functions. For example, to simulate landslide- or earthquake-generated tsunamis, large amplitude waves reaching the top of the flume walls can be produced with water depths ranging from 2.5–3.5 m with wave periods of 3–10 s.

The flume is equipped with a mobile walkway, a gantry crane, a series of multipurpose supports, as well as : 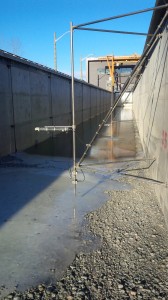 Local acquisition systems: 14 National Instrument CompactRIO systems with 256 analog inputs each (32 channels per module x 8 modules sampled at 250 kHz in total per module) located every 5 m along the flume from 45 to 105 m from the wavemaker.

The CT Scanning for Civil Engineering and Natural Resources Laboratory possesses a smaller scale wave flume. This equipment can be used to carry out experiments at a small scale before they are reproduced at larger scale in the main flume. The small flume enables the study of internal structures of marine sedimentary objects, the study of sedimentary dynamics in coastal and estuarine environments (sedimentological, geophysical, and physical measurements, use of radioactive tracer), and helps reveal transport processes.